The store will not work correctly in the case when cookies are disabled.
Free shipping within the EU for orders over €50. Orders >€150 may be charged taxes and duties on arrival. Click here for festive cut-off date info.
Please note that by changing store you will lose your cart. Are you sure you want to proceed?
Yes! Change Store
No, Stay here 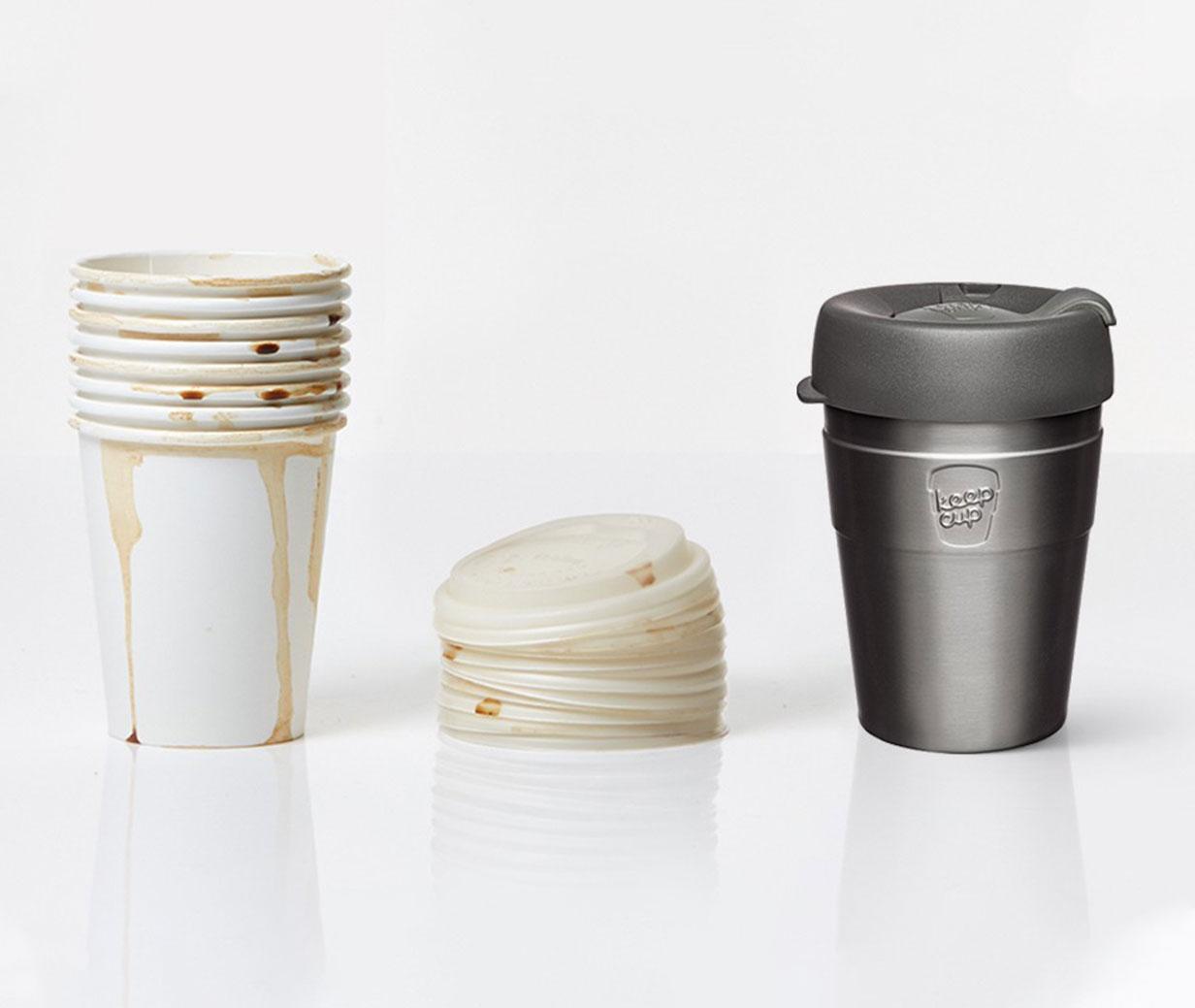 KeepCups were originally designed as a simple solution to a systemic problem – a durable, reusable tool that would outperform single-use disposable cups, reduce waste and inspire positive change for those who use it.

But how do we know this solution is the best course? We have to take into account the carbon impact of its manufacture, packaging, shipping, upkeep, and ultimately, end of service.

We follow the gold standard to underpin our environmental claims, using independent and certified experts Edge Environment to conduct comprehensive ISO 14044:2006 and ISO 14040:2006 compliant life cycle assessments. The original LCA, published in 2018, was peer reviewed by UK-based sustainability consultants Eunomia to rigorously assess data and assumptions and ensure those assumptions (such as electricity and water use) applied to markets beyond Australia - specifically the UK and EU.

Part of the success of KeepCup is the self-evident recognition that single-use packaging is having an impact not just on climate, but pollution and landfill. Any argument that we would be better off with single-use materials that are ‘recyclable’ or ‘compostable’ defies common sense and creates inertia around the momentous changes we need to make to how we live and work. When using LCA as a comparative tool, understanding the intended lifespan of the product is critical as it will determine the fitness for purpose.

The efforts of everyday changemakers over the last decade has demonstrated one thing above all else – that people want to be part of the solution and drive positive change. KeepCup is driven by individual behaviour change but, as a collective, we all have the power to remove social licence for single-use products.

In the second half of 2020, we published an addition to the 2018 LCA document to include the assessment of our new product, KeepCup Thermal (the first LCA has been read over 9000 times on ResearchGate - a significant reach for a scientific document of this type). They’re technical, scientific reports that many people won’t engage with in depth, so we aim to summarise findings to make them accessible. In doing so we use breakeven points as a useful indicator of impact.

Making the information easy for a large audience to digest is always a balancing act; the result of oversimplification is greenwash. With that in mind, we revisited the report and have added the product lifespan to the carbon impact statement.

We make LCA research publicly available and open for anyone to scrutinise, as well as taking onboard opportunities for improvement.

So, let's provide comparison over a number of metrics:

The embodied energy in our stainless steel KeepCup Thermal is 24-26 times that of a single use cup.

This is based on KeepCup Thermal lifespan – it means you’re using your Thermal for one coffee five days a week for eight years - 2000 times. The breakeven point is based on analysing use, not cup versus cup, so the embodied carbon of one year of use is amortised.

Over this span of time, every use equals about 8.7 grams of CO2e (about 90% of this is tied to washing it after each use).

This is more than 4 times lower than a single-use disposable cup.

But it's about use

It is not meaningful to just compare a Thermal KeepCup against a single-use disposable cup – we need to look at the full life cycle and use, not just the materials.

When conducting an LCA, it is important to express an objective functional unit to make sure we compare like with like.

For the KeepCup LCA, the functional unit that allowed us to compare different cups, was defined as one year of use.

Therefore, the Thermal KeepCup starts with 1/8th of the embodied carbon of the cup, that is 219 g CO2eq.

After the eight uses, you have paid off that year’s carbon debt invested in the product, and yes you’ll add carbon emissions from washing every time (7.8 gCO2e) but it’s far less than using a new single-use cup every time (37gCO2e per cup).

A 12oz KeepCup Thermal is made of 213 grams of materials (180 grams for the steel cup and 33 grams for the plastic lid), whereas after a year of coffee drinking, 12oz single-use cups will create 3kg of material waste (including the paper, plastic liner and plastic lid of the disposable cups).

What is the embodied carbon per use for the Thermal KeepCup?

Since the carbon invested in KeepCup Thermal must be amortised across the total number of uses, this will depend on how many times you use it and wash it. For example:

That’s the whole point: remove unnecessary single-use items from our communities AND design products for long life AND use them for as long as possible. That criticism only highlights that we need to underscore this point more in our communication.

We’ve been saying it since 2009 – the best reusable is the one you use.

The lifespan is based on a customer survey conducted in 2018 which found KeepCup Original and KeepCup Brew have an average lifetime use of 4 years. Given that stainless steel is more durable than glass or plastic and the need to underscore the importance of product lifespan on impact, we set the lifespan at 8 years. As we launched the product late 2019, this is not yet evidence based, but it makes sense that stainless steel will last longer than breakable glass or plastic.

The best reusable is the one you use

Reusables are designed to be used and reused. They have higher embodied energy (the energy used to make them – material extraction, manufacture and assembly) than disposable cups. Of course they do, because they’re durable and designed for longevity of use. Comparatively, single-use items cost less to produce individually but we know they contribute to convenience culture and an ongoing waste crisis that requires our urgent attention.

If you’re considering buying a reusable for short term use, consider the energy that went into making it and the lifespan required to warrant its purchase. If you don't expect long term usage, you would be better off enjoying your coffee inhouse or using a reusable you already have.

If high use over many years is your expectation, KeepCup Thermal is a great choice. The best reusable is the one you use.

The full Life Cycle Analysis can be found here.

The KeepCup Thermal Life Cycle Analysis can be found here.

LCA: Life Cycle Analysis, or LCA, is a means of assessing the environmental impact of a product over its entire life cycle, including raw material extraction, manufacture, transport, packaging, use and end of life. ISO 14040:2006 is the international standard for LCAs to ensure they are rigorous and accurate. KeepCup LCAs are to ISO 14044:2006 and ISO 14040:2006 standards.

When conducting a Life Cycle Assessment, it is important to express an objective functional unit to make sure you compare like with like.

For example, when comparing transport by bus, car, train and bicycle, the common unit would be one person transported one kilometre, and with assumptions for how long each vehicle will last, how many people are occupying each vehicle etc.

For the KeepCup LCA, the functional unit that allows us to compare different cups, is defined as one year of use.

Embodied carbon: The embodied carbon of a material is the greenhouse gas emissions from the extraction of raw materials to their processing into a usable form or product. It’s often considered the hidden impact of a product.

Embodied energy: The embodied energy of a product is the energy that goes into making it, including raw material extraction and manufacture. It’s often considered the hidden impact of a product.

Cradle to gate: Cradle to gate analysis assesses a product’s life cycle before it reaches the consumer (up to the point it leaves the factory “gate”). In our LCA it includes the product and packaging impact of raw material extraction, manufacture, assembly and transport from suppliers. It’s important in identifying the embodied impact of a product.

Cradle to grave: Cradle to grave analysis includes all life cycle stages from raw materials extraction to manufacturing, transport, packaging, use and end of life. Looking at a product from cradle to grave provides a picture of its entire life cycle.

If I drink takeaway coffees a you will save
Discover your impact
Looks like you are browsing from United States, but you are currently looking at the EU site, change to your local store?